Barbara Guggenheim is a partner in Guggenheim, Asher Associates, Inc., one of America’s best-known firms of art consultants.

For over twenty-five years, Barbara and her partner, Abigail Asher, have built collections for top corporations, such as Coca Cola and Sony, and numerous individuals, including celebrities such as Tom Cruise and Steven Spielberg. She holds a doctorate in Art History from Columbia University, has taught on the college level, lectured at the Whitney Museum, and worked at Sotheby’s and Christie’s. She lectures to museums and organizations on a wide range of art historical and art world topics, from “How to Invest in Art,” to “Collecting Contemporary.”

Barbara has been the subject of numerous magazine articles, including two profiles in Vanity Fair, and an interview on Larry King Live. 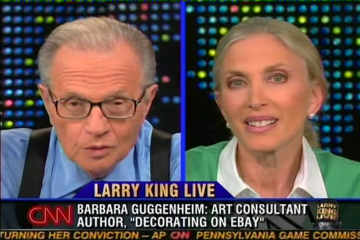 As a writer, Barbara contributes humor to W, ELLE, and HARPER’S BAZAAR. She is also a contributor to THE HUFFINGTON POST and THE DAILY BEAST.

She’s written several books, including “DECORATING ON eBAY,” and “THE ULTIMATE ORGANIZER.”

She is currently completing a book that takes you behind the scenes in the art business and shows you how you can be the smart money in art, “ART WORLD: THE SECOND OLDEST PROFESSION.”

With offices in New York and Los Angeles, Barbara lives a bicoastal life.