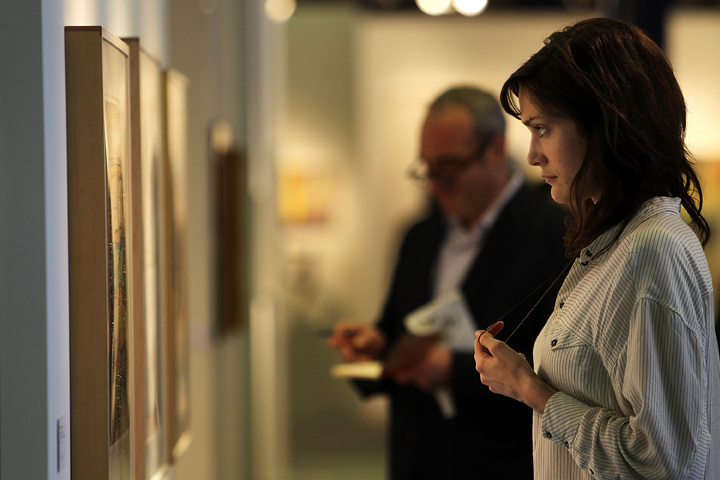 Think Armory Week is overload? Frieze in May will be yet another gathering place for the global elite.

Brace yourself. Here comes another art fair! This time it’s Frieze. In London’s Regents Park every October for the past nine years, Frieze has gathered nearly 200 galleries that strive to present their most attention-grabbing artists, like Tue Greenfort, whose 2009 entry, Condensation, consisted of viewers’ breath collected in plastic bottles.

O.K., it’s been fun, but why is Frieze coming to New York? Do they think we can’t wait until next October? Or are they looking to grab the captive audience that converges the first week in May for the big contemporary art sales at Sotheby’s and Christie’s? That could expand their franchise as well as their net worth. Since the evening sales are filled with stratospherically priced works most of us can’t afford and the day sale stuff is often a little tired, Frieze, which comes just before those sales, may offer the perfect solution. You can take home something fresh, edgy and modestly priced, rather than leaving New York empty-handed.

Art fairs are mushrooming like film festivals. Remember when there was only Cannes? Now every town has its festival—including Malibu and East Hampton.

Similarly, there’s an art fair almost every weekend of the year somewhere in the world—Dubai, Shanghai, Abu Dhabi, Hong Kong, Cologne, Brussels, Miami, Paris. I checked my calendar, and found a two-week break in August, just enough time to have my clothes cleaned and shoes polished before I hit the road again. For many on art fair overload, one more fair could prove to be some sort of tipping point. This week the Armory Show, the Art Dealers Association of America’s the Art Show, and many satellite fairs, are upon us. The mere mention of Frieze, which comes with its own satellites (so far, Nada and Pulse), may send fairgoers into paroxysms. How will they get to Randall’s Island, where Frieze will be held? Is there a private helicopter pad? Those who think Frieze is that one fair too many will moan about it like film industry veterans, “Can you believe it’s already time for Cannes again?”

Of course, not all art fairs are created equal. There are the giants—the two Basels, in Switzerland and Miami (the latter of them for art and fun), and Maastricht, with its Old Masters, for the ultra-serious buyers. But even these are being questioned.

And yet, art fairs don’t hurt anyone. The organizers make a bundle, galleries and artists sell or at least brand themselves, and collectors get to look at interesting things and take some of them home. And what’s so bad about the parties? They’re part of every trade show. If you sell refrigerators in Winnetka and go to an appliance trade show in Chicago, where you hang with supermodels, how bad can that be? Aren’t these art fairs pretty much just trade shows for art insiders or those who want to be? Publicity flacks tell us art fairs are sexier, but frankly I’ve never been to an appliance convention. Maybe they throw some pretty good parties. Anyway, I can’t criticize. I’ll go to a party for the opening of a new handbag.

The bottom line is people go to art fairs less to buy art than to be part of a new social order. In the late 19th century, when Mrs. Astor gave balls for “the 400,” the only way to make it in society was to be born into it. Later, even Mrs. Astor had to accept the arriviste Vanderbilts, because they made too much money to be excluded. After that, entrée eased and you didn’t even have to be loaded to get in—it became meritocratic, you could get in by writing the great American novel or curing a disease. By the ’60s, society was on the move, jet-set style: Gstaad in February, London for “the season” in June, Saratoga for the races in July and so forth. These days, it’s unrelentingly global.

Now there’s a whole new “society” based on art collecting, and the pilgrimage route is littered with art fairs. A few weekends of perspicacious buying gets you behind the velvet ropes, but whether you buy or just browse doesn’t make much difference. All you have to do is learn the names of a few hot artists, who the players are (meeting them is even better), who’s collecting what, and you’re in. It’s the new lingua franca of those who are, or would like to be seen as, cultured. As Becca Cason Thrash, a Texas socialite, told The New York Times a little over a year ago, “We all collect art. We all love to travel. We all love being together on the circuit. You see your friends and it’s like, ‘Same time, next fair.’”

At a recent dinner, a Frenchman of my acquaintance told a German he’d never met, “You have a Mike Kelley; I have a Mike Kelley.” This meant, “You have a million dollars to piss away; I have a million dollars to piss away. You got to the head of the line. I got to the head of the line. We can be friends.” It’s a secret handshake. If all it takes to get a membership in this elite club is several million dollars, for people who have tens or hundreds of millions, it’s cheap at twice the price. And the more esoteric works they buy, the better. Hanging and preserving an expensive piece no one understands provides not only the aura of wealth but also the impression that the owner is one of the rare intellectuals who really “gets it.”

We may be entering the era of online art fairs, like last month’s VIP, where we can cruise the galleries in our pj’s with a cup of coffee in hand, but these virtual ventures don’t really replace experiencing the art in person. If Frieze’s coming to New York provides another opportunity to do that, I’m thrilled.

For now, let’s all muscle through Armory Week. Pace yourself, wear comfortable shoes, keep your eyes open, ask a lot of questions, and bring some PowerBars and maybe a hired gun (like an art adviser). Whatever you do, enjoy the parties.