WE LIVE IN CHALLENGING TIMES.

Many are depressed, scaling back, or falling behind. Yet, there are some people who not only survive but thrive regardless of times and circumstances. 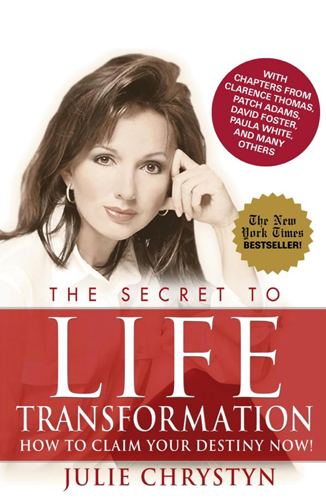 What do they know that the rest of us don’t? As I was pondering the question, I met Julie Chrystyn, a new girl in town. She’s written The Secret Of Life Transformation (Phoenix Books, $25.95), a half how-to, half inspirational book that takes on this issue: How do you create a vision for your life and make that vision a reality?

She combines no-nonsense instructions with interviews with 12 extraordinary individuals-from composer David Foster to Supreme Court Justice Clarence Thomas who’ve achieved mind-boggling success against impossible odds. She makes the point it doesn’t matter where you’ve come from-if you have a laser sharp vision, you can get anywhere you want.

As Larry King states in the book’s foreword, believers “create visions far beyond our realities and go for the gold in defiance of obstacles.”

Julie Chrystyn’s own journey is the stuff of fairy tales. A poor kid from rural, formerly-Communist Yugoslavia, she migrated to Chicago. At 12, she underwent radical surgery for severe scoliosis and spent a year in bed in a full-body cast. Told that her lower body might be paralyzed for life, she persevered and, two years later, broke her school’s record by jumping rope 3,789 times. She became a journalist and sought-after ghostwriter for biographies of the rich and famous, married the man of her dreams, bought the publishing company she worked for, and moved into a Bel Air mansion.

She also flies around the world in a $50 million Bombardier. If the world isn’t your oyster – yet – pick up a copy of The Secret Of Life Transformation.